After getting to sleep at 4 AM, we awoke at 6 AM to prepare for the first day of the sale.  We make some coffee...a lot of coffee...and continue pricing things, moving items around, and actually creating the estate sale signs that you saw in the last post.  My wife makes a run to McDonald's to get us something to eat before the show started (not a great option, but about the only option we had for something quick that early in the morning).

I left the house about 20 minutes before the start of the sale to put up signs and there were already a couple of people parked outside waiting for the sale to start.  I ended up miscalculating the amount of time it would take to put all the signs up and I didn't return to the house until 20 minutes after the sale started.  When I returned it was a zoo.  Cars were lined up and down the street. Apparently advertising the sale on EstateSales.net can bring in quite a crowd.  Hope it didn't bother my neighbors too much.

In our exhausted state, no one thought about doing a walk-through of the house before we opened the door.  As it turned out, I had left my laptop running so we could continue pricing items when I was distracted with making the sale signs.  It wasn't until someone tried to buy it that my wife realized it was still sitting out and rescued it.

Sales were very brisk throughout the day and we made a majority of the entire sale proceeds this first day.  We didn't even have time to stop for lunch (or even notice lunch time passed by).  The 60" LED flat screen TV, home theater with custom speakers, stainless steel gas grill, front loading washer, futon, one bedroom set, and other miscellaneous items were sold the first day. 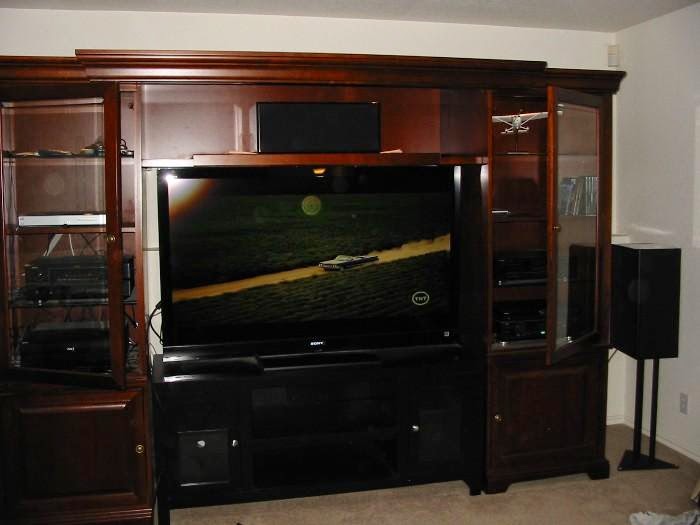 Unfortunately it was not all good news.  Even though we had three people running the sale (the estate sale companies only planned on two), theft was an issue.  Two of us tried circulating through the house to answer questions and prevent theft but it apparently wasn't enough.  While I was busy demonstrating the home theater equipment to a buyer, I noticed that a rare CD collection (KBCO Studio C Box Set, numbered and one of only 200) was missing.  Later in the day we found a few boxes that used to contain items but only the empty boxes remained. And a few of these items were priced less than $1. The camera bag that went with a 35mm camera I was selling also walked away (I kind of wonder if it was used to smuggle the Box Set out).

One of the more disturbing things we found was discovered after the sale closed the first day.  In addition to the computer being left out, the old digital camera I was using to take pictures for the estate sale site was also left out.  The camera itself wasn't stolen, but the compact flash memory card was missing (you know the old, "big" by today's standards, cards).  Really?!?!  Why would someone take a 64 MB compact flash card...here you can buy a 1 GB card for a little over $6?  Other than pictures of the sale, my wife had taken pictures of some of the items she was selling so she could remember them and now those are lost.

So, while we got rid of a lot of stuff and recouped a fair amount of our freedom chips, the thievery put a damper on our excitement. Guess I forgot that not all people are as good as most of the cruisers I've met.  All we can do is hope that karma catches up with the thieves one day.