Not The Way We Wanted To Arrive In Brunswick

After spending the night at Palm Cove Marina in Jacksonville Beach, we get an early start so we can make it the rest of the way to Brunswick.  The wind is again on our nose, expected to clock around to the northeast in the afternoon...so we might as well just continue motoring up the Intracoastal Waterway (ICW). This time was different though, for the first time there will be no captain or instructor or other help, just my wife and I and our Leopard 38. I know I am ready and my wife was too.

We cast off lines, depart the dock, and motor down the narrow channel back to the ICW and we were soon making our way north in the crisp morning air.  The clouds from the previous day were long gone and it looked like it was going to be a better day than the previous one. 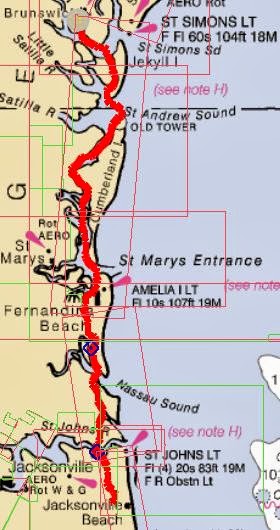 Ironically, this part of the trip does provide a little more of a navigation challenge than the previous day, but we got good briefings on the route from the captain as well as my friend and former broker Pete, so we figured we were in pretty good shape.  It is always good to have local knowledge and on this section it would definitely help keep us out of trouble.

The ICW is in a pretty wide river through Jacksonville, but there is one area where the most of the flow squeezes under a causeway bridge.  This was the first challenging spot on which we were briefed. Going under this bridge can be a bit tricky if there is much flow...and of course we were fighting the current a bit when we got there.  The boat speed dropped from 7 to 4 knots as we made our way under the bridge and steering became a bit squirrely. I'm glad I was warned about this and the passage under the bridge, other than slow, was uneventful.

Soon the ICW opened up into the St. Johns river and my wife and I were looking at a naval shipyard that had some large military vessel in dock.  We were admiring the ship while allowing a wide berth to anything military (seems like a prudent idea) when it donned on me that we were briefed about this as well.  Sure enough, I check the chart and the shipyard was where we needed to make a turn in order to stay on the ICW.  Glad I caught that before we motored for a half an hour in the wrong direction.  Of course, just after the turn there is also a bascule bridge (fancy term for a draw bridge) that we needed to open (unlike some motorboats, our 59 foot mast doesn't fit under these so well).

In the confusion of getting back on course, I forgot to check the name of the bridge...but wanting to get a call in sooner rather than later I took a guess and haled the bridge using the name of the street I found on the chart. Now I've heard stories of bridge tenders that won't respond unless you hail them with exactly the right bridge name on exactly the right channel.  Perhaps it was the entertainment of my abrupt U turn or maybe this tender is just nicer than some, but fortunately for me he was more forgiving and simply responded with the correct name.  I requested the next bridge opening and he told me to continue my approach (I knew that the bridge was on-demand and figured this would be the response, but I've also been told to be as nice as possible to the bridge tenders because they can easily make your life difficult...and besides there really isn't any reason not to be pleasant to someone providing you a service).  As soon as we cleared the bridge I radioed back that we were clear, thanked him, and wished him a nice day.

The next point that we were briefed on is the submarine base at Kings Bay.  The ICW comes right up along side this restricted area and you need to make very sure that you turn when you are supposed to, or I imagine you will have some explaining to do to with some people that have big guns and no sense of humor. You also cannot cut the corner here because, while the river seems wide, it is very shallow outside the channel markers.

As we motor up the inlet toward the base we seem to once again be fighting the current (the joke about the wind and current always coming from the direction you want to go in a sailboat seems to be holding true) and we were making between 4 and 5 knots again.  I move over to the edge of the channel in hopes that the shallower water might reduce the currents effects a bit and we did pick up maybe half a knot...better than nothing.  We come up to the base and I see warning signs and a patrol boat sitting at the entrance.  I keep a watchful eye for the ICW markers and make our turn right when we are supposed to.  So no conversations with grumpy military officials for us that day. And sorry, no pictures were taken in the area either.

Once we turned onto the ICW, the depth dropped from the 30 or 40 ft. we were seeing back to the 8 to 12 that is more typical of the ICW.  Even thought we were still fighting a bit of a current, our speed did pick up some as well.  We continued motoring up the ICW, meandering through the countryside and enjoying the sun and scenery that floated by.  I did wonder if we made the right decision going up the ICW since it wanders around a bit in northern Florida and Southern Georgia.  Probably best for us newbies to just enjoy the wandering up the ICW though...even if it does take a bit longer.

Eventually the wandering did get the best of me and I noticed that ahead in the Saint Andrew Sound, a little south of Jekyll island, we were going to be close to the ocean in a rather wide sound. The wind was going to be coming close to setting us up for a nice beam reach through the sound.  So, as we got to that area, we pointed the boat into the wind for a minute and raised the sails.  The wind was blowing over 20 knots so we did reef both the main and the genoa.  We turned back on course, trimmed the sails and pulled the engines to idle.  Finally...we were a sailboat...well, almost.  Since we didn't have a long time to sail, I figured it was best to just keep the engines running at idle instead of shutting them down and restarting them a few minutes later.  So, technically with the engines running (even in idle) we were still a motorboat, but we were sailing...and with the reefed sails we were making the same speed we had been with the engines engaged.  It felt good!

The 15 or so minutes seemed to pass by very quickly and we were soon at the point where we needed to turn into the narrow and shallow ICW channel behind Jekyll island.  Oh well...at least we finally got to sail our sailboat...and that was great.  We furl the genoa, engage the engines again and turn into the wind and drop the main.  Back to full motorboat mode again.  We throttle the engines up and with my wife at the helm I was forward to secure the main sail, halyard, and reefing lines.

As I return to the cockpit my heart sank.  I notice what appears to be steam or smoke coming from the starboard engine room hatch and that faint smell of hot metal from an engine overheating.  I quickly check the engine temperature gauge and find it pegged in the red even though engine alarm had not gone off.  My wife, still being very new to the boat simply didn't notice difference and since she was looking forward, she did not see the steam and (probably thanks to her encounter with Zicam) didn't pick up on the hot engine smell.  So, I quickly shut the engine down, grab a fire extinguisher, and go check the engine hatch.  It does seem like steam and not smoke so I slowly open the hatch.  Steam billows out of the engine room...but fortunately there is no fire.

If there is one thing I learned in aviation, it is that redundancy is a good thing.  One of the advantages of a catamaran is that it has two engines and in our cat one engine can push it along at a pretty respectable speed (at least 3/4 of full speed with both engines).  So, we continue to make our way along the ICW on our port engine while we try and figure out what to do. We are perfectly safe at the moment, but you see, this new captain is pretty sure he will have a problem trying to dock on a single engine in a crowded marina.  I've gotten pretty good at maneuvering with the two engines...but this was a bit much to ask of myself.

We decided to avail ourselves of the services of our newly acquired SeaTow membership (think AAA of the ocean) and get towed in to the dock. They get us into our slip and we get the boat tied up.  I'm sure glad I bought that membership, the "free" tow would have otherwise cost us $600.  I also have to thank the folks at Brunswick Landing marina, even though we got there late, they stayed and helped us get tied up and give us the key cards to the clubhouse/bathhouse before they left for the evening.

With all the steam in the engine room we weren't able to assess the situation with the engine even after we arrived.  The next day we rent a car in order to go shuttle my car from Palm Coast to Brunswick and then hopped on a plane back to Denver.  So, assessing the engine will have to wait until I return in a week. This certainly wasn't the way I wanted to end our first trip in Rover just the two of us, but it seemed like the prudent thing to do.