A little over two weeks ago I woke up with a sore throat.  Since that time it developed into either a sinus infection or pneumonia or both...depending on which doctor you want to believe.  A couple different courses of antibiotics later, and I think I finally feel well enough to start rejoining the land of the living again.

While catching up on my email and blog reading, I noticed I've been "nominated" for something called a "Liebster Award" by a couple of fellow cruising bloggers.  The first nomination came from my friends over at Diving Into Cruising who I met while I was down in Palm Coast/Hammock Beach Florida. The second nomination was from Catchin' Rays, another family preparing to cruise and about in the same point in the process as we are and while I haven't met them yet, I did meet their boat when we were in the Keys surveying another boat.

A blog is "nominated" for this "award" by other bloggers.  It is a bit like a chain letter, except that the idea is to allow a blogger to introduce or recognize a fellow blogger's work.  So, being nominated is a bit of an honor...or at least an indication that someone else likes your work.

To accept the award, you are supposed to (as best I can tell anyway):

Normally I'm not much for chain letter type of things, but in this case I'll make an exception.  So here it goes.

1. Introduce us to your crew.  Who are they and what role do they play in your operation?

Mike - A 40-something Colorado native, software engineer, and private pilot who has always had a fascination with the sea. Having some mechanical and electrical aptitude, responsibility for most boat systems maintenance will fall to me. 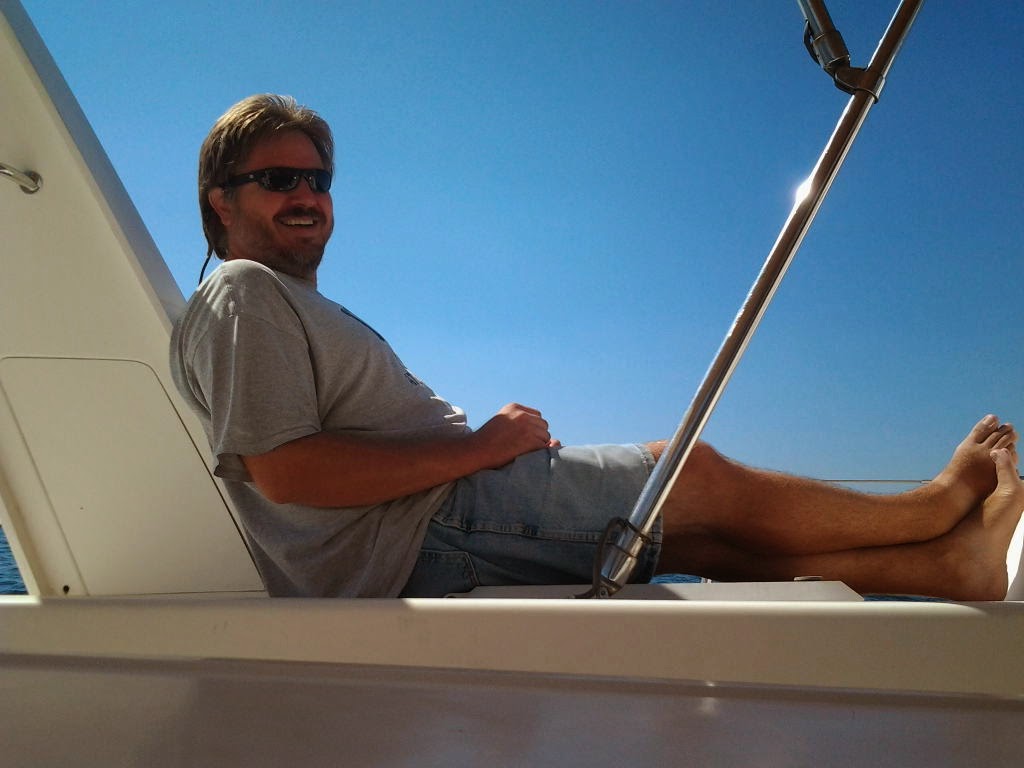 Anja - (In her own words) I'm also a 40-something Colorado native who has worked at the same job in state government for nearly 23 years. Whereas I'm somewhat apprehensive due to my lack of sailing skills and constant worry about how Madison and Tucker will adjust, I'm looking forward to a change.  I think my role will mostly consist of assisting Mike in fixing things and cleaning. 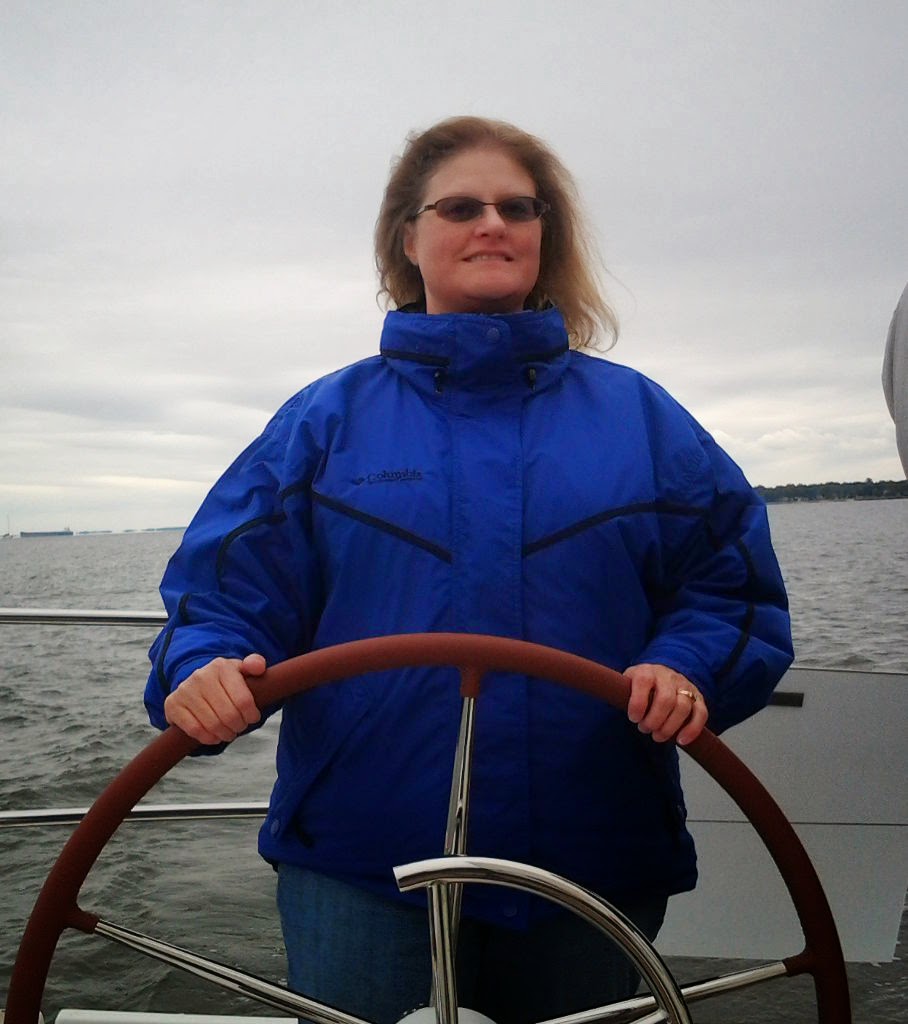 Madison -  I'm the eldest canine crew member and a little over 10.  My parent's taught me to swim a year or so ago, but I'm not sure why.  Swimming was interesting, but I got a little freaked out the first time when I was sniffing at the water and accidentally fell into the pool.  Fortunately I think I'm indestructible so it is all good. My parent's like playing "guess what breed" I am (here's a hint, I'm a mix of 3 according to the genetic test, but probably not one you might expect)

Tucker - I'm the youngest canine at 4 years old.  I also learned to swim a year ago and I found it, like most other things, to be scary.  My older sister Maddie is my hero.

2. What sort of boat do you have and would you recommend it for other adventurers hoping to live aboard?

We own a 1999 Leopard 38 catamaran.  You can read more about it here.  Since I've only lived aboard the boat for about 6 months by myself, I'm not sure I have enough experience with it to make a recommendation.  We do like the amount of space on the boat, the decent size refrigerator, comfortable saloon and cockpit, and the separate stand-up shower compartment is a nice creature comfort.

3. Where are you now and what are your sailing plans, if you have any, for the future?

Right at the moment the boat is on the hard in Virginia while the crew is all in Colorado working to liquidate our assets there.

4. How do you support your lifestyle while sailing and cruising?

We are still working out all the details on this one.  The current plan is a combination of investments and picking up some odd jobs here and there as needed.

5. What’s the best experience you've had while living aboard?

There have been a lot of good experiences I've had in my short time living aboard.  I've met a lot of good people and felt the camaraderie of fellow boaters.  My favorite experience thus far, though, was a night watch on the outside passage from Southport to Oriental.  Sailing along with reasonably calm seas and out of sight of the artificial lights of land, I clipped my harness onto a jack line and went to sit up on the fore deck and stare up at the stars.  It was a perfect night to be sailing and stargazing.

6. Name the most challenging experience you have had while living aboard and what did you do to overcome it?

Spending the time I spent living on the boat without my family.  My wife and dogs remained behind while I moved aboard to help fix things up in preparation for our move aboard.  My wife stayed behind to liquidate our stuff and sell the house.  I came back to try and help out with that effort so we can both move aboard together soon.

7. Is living aboard and sailing an alternative way of life for you, an escape from the system, or is it just a temporary adventure?

Yes, yes, and who knows.  Call it a mid-life crisis, an epiphany, or what you will, but we decided that we needed to simplify our lives and lower our impact on the environment.  This lifestyle seems to fit the bill.  I'm sure at some point we will likely need to "swallow the anchor", but who knows when that will be.

8. Any big mistakes you have learned from that others may learn from too?

I'm 6 months in and mostly doing refit and repair work so I don't know that I've made that many "big" mistakes yet.  The biggest may be in trusting "professionals" who work in the marine maintenance industry.  Unlike fellow boaters who all seem pretty cool, best I can tell it seems that most of the maintenance industry appears to be staffed by every crooked former car mechanic you have ever met.

9. What advice would you give to youngsters just finding their place in the world?  College, skill/trade, world travel on the graces of good luck?

Instead of doing what will make others happy, figure out what will make you happy and pursue that.  And definitely travel the world (you'll probably need to in order to do that figuring out I just mentioned anyway and it will give you a more realistic perspective on the world).  Doing what others always expect

10. What motivates you to blog and what tips can you offer fellow yachty bloggers?

I started the blog as a way to explain this idea to our parents (since we hadn't told them about the idea yet).  Now I tend to write about things that I wondered about earlier in this little odyssey in hopes that others following along might find it useful or entertaining.

So, what blogs would I nominate for this chain letter award?  Well, there are some very well known blogs that I read on a regular basis, but you probably know them as well. They, and the other blogs I regularly follow are listed in the column to the right.  A couple that I'd specifically nominate from the group:
And what questions would I ask?  Well, the ones I got were pretty good, so with only some minor edits...
So, there you have it.  Hopefully this post was worth the read and you might want to check out some of these other blogs as well.