Ever since I started living on the boat, I realized that having a bicycle would be a good thing. Thus far I've had a car to help get me from place to place, but eventually the plan is not to have one.  It is a pain to move the car whenever you move the boat and, well, they don't float, so taking it down island isn't a possibility. There have been a number of times, even with the car, I would have rather had a bike.  In Brunswick it was just as easy to go downtown on a bicycle as it was in a car.  Just getting around a marina is often easier and faster on a bike.

I've been a bit hesitant to get one for a couple reasons.  First is rust.  Coming from a state where humidity levels above 50% would be considered pretty humid and there are no corrosive salts to contend with, I was worried that any bike would turn to a pile of rust on a boat. The other issue is simply where to put the things. While I would have loved to keep our crossover bikes, they could have only been stored out on deck. A folding bicycle would be better as we could store them in one of the spare berths, but I wondered how well they worked since I hadn't ever used one.

I had been keeping an eye on Craigslist for a while now and what I was finding was that the only folding bikes that seemed to come up were the rather expensive ones...and even used they wanted a pretty hefty price.  I'm sure the bikes are worth it, but I'm not sure I know how to take care of an $800 bicycle, even if I can get it for $300~400.  If anyone has any tips for combating rust on such things, please let me know (I've heard recommendations for all sorts of things from linseed oil, waxes, and WD-40...and equal numbers saying to never use the exact same things).

Well, remember that trip to Camping World?  The reason we were there wasn't to find a washing machine, but instead the purpose was to look at some inexpensive folding bikes they carry, see if we could ride one, and generally try to determine if they were worth having.  We figured we would find some folding bikes to try when we were down here in Florida, but the only places we've found that carry them are West Marine and Camping World.  Since Camping World had a bike for $140 on sale (about 1/4 the price of the used ones or the ones at West Marine), we decided we would go check them out.  After a brief test ride, we decided to take a couple home. 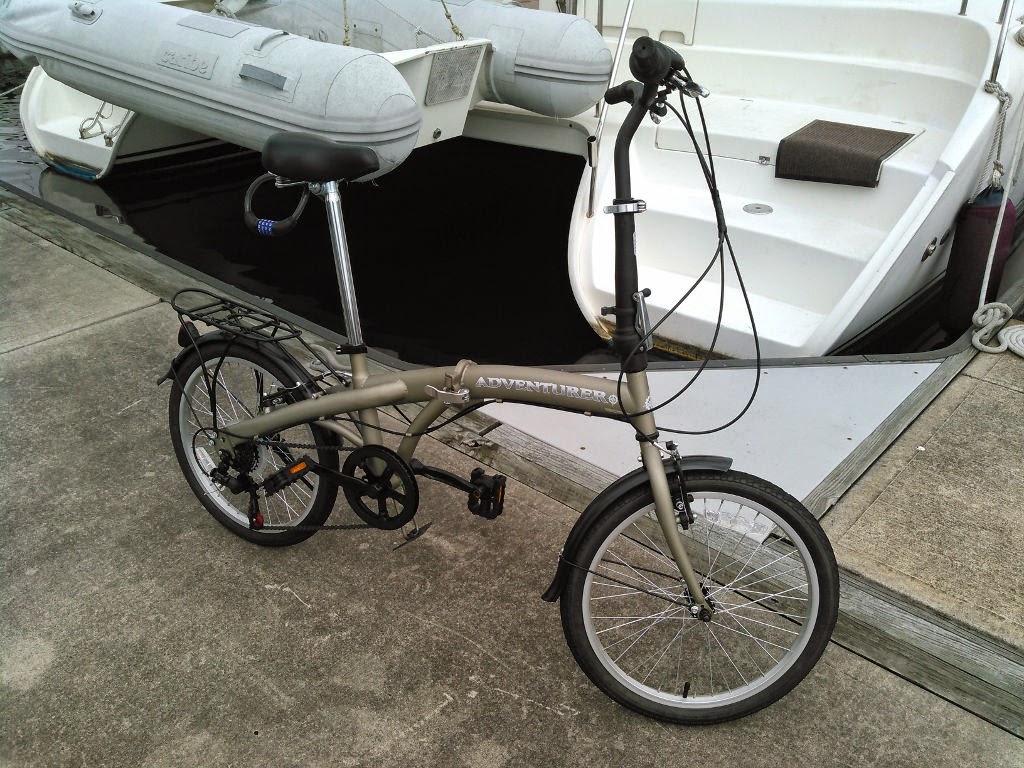 The bikes we got are the Adventurer 6-speed folding bike. While not the best quality, they were reasonable quality and I think would serve our purpose well. They are a steel and alloy frame as best I can tell, so rust may be an issue if the paint chips and on exposed parts (like the chain). They ride fairly well for a small folding bicycle with a short wheel base. Given the size of the bike, seat adjustment is a bit limited and I could probably use an additional inch myself, but most under 5'11" or so should be OK with the fit. The derailleurs are Shimano..at least a recognizable name. The bike comes with fenders and a carrier rack, two reasonable features for land transportation for a cruiser.

Buying a bike from Camping World (or any other non-bike specific shop) can be an issue for those not knowledgeable in bicycle repair and maintenance.  The bike came in the original box with no setup or tuning.  When we got them home I had to adjust the derailleurs to get them to shift correctly and adjust the brakes to get them to stop squeaking and work properly (one of the pads was actually loose).  One of the bikes had a brake cable adjustment that was cross threaded and we had to go back to Camping World where they let me swap the part out on their floor model (which had another issue with the handlebar so we couldn't just swap the entire bike).  But, after getting everything set up, I've been pleased with the initial use of the bikes. 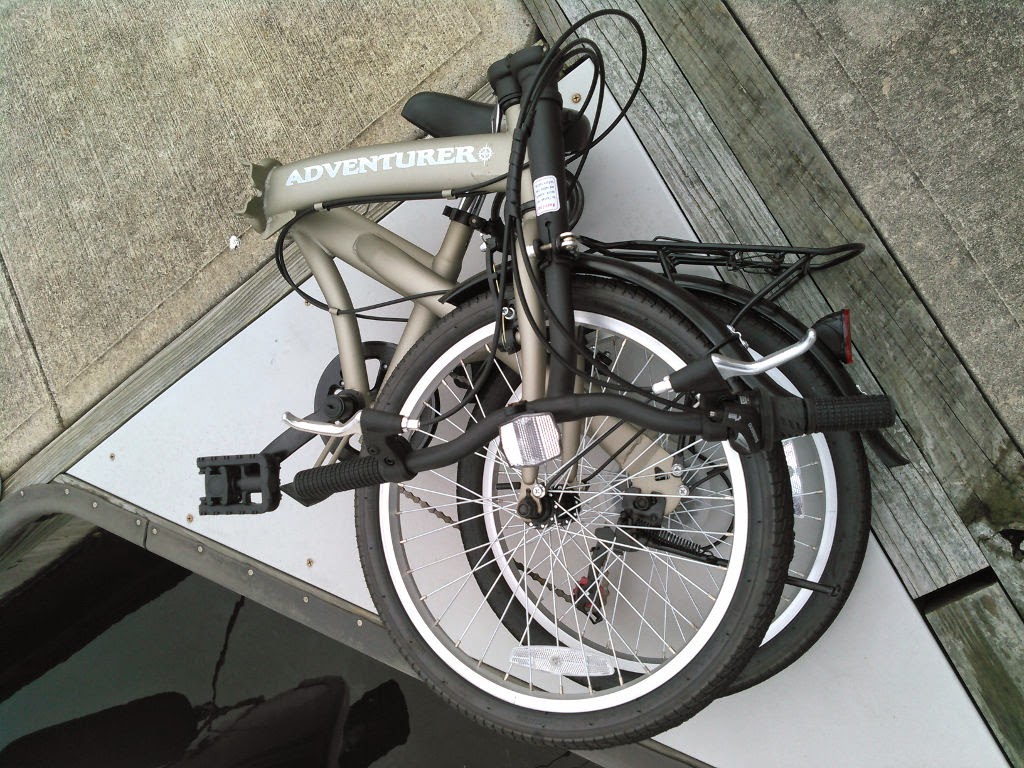 As I hinted to above, I don't get full leg extension, but it is pretty close...and something I can live with for a folding bike.  The 6 speeds seem to be about right for the bike.  I was able to take it over the nearby ICW fixed bridge (65' height at center) comfortably in first gear.  5th or 6th gears seem to be good for flat to slightly downhill cruising.  In general I don't seem to miss the lack of an additional 15 gears to choose from on a larger bike.  The wheel base is short, so it feels just a bit less stable than a full size bike, but I only really have any issue with it during slow speed maneuvering and am still able to ride it up and down the dock ramps without feeling like I'm going to crash.

So, if I can keep it from rusting apart, I think we have a reasonable solution for now.  Given the price, it seems like a good bike to "learn about" living with bikes on a boat even if we make some mistakes and they do rust apart.  Now, should I go try to find some Boeshield, ACF-50, or linseed oil to coat the thing....hmm....
Posted by Mike Boyd at 9:18 AM

Email ThisBlogThis!Share to TwitterShare to FacebookShare to Pinterest
Labels: bicycle, living on a boat, transportation