Well, the bad weather has returned to Brunswick and most of the southeast I think. So I decided to convert one of my more standard fluorescent fixtures to LED as a nice indoor project. I took a few more pictures this time so I could write up some instructions for anyone interested in trying this. I also decided to do an upgrade, I made the fixture switchable between white and blue light. While the blue could be useful for preserving the eye's night adaptation, since I can't convert most of the cabin lights this way, I don't know how useful it will actually be. But a fun thing to play with on a cold, rainy day none-the-less.

In the process below, I chose to reuse the wire in the fixtures and solider the connections.  If you are not comfortable with soldering, there are clip on connectors that can be used with the strips and you could use crimp on connectors to connect the power leads.

But first a few notes about LED light strips 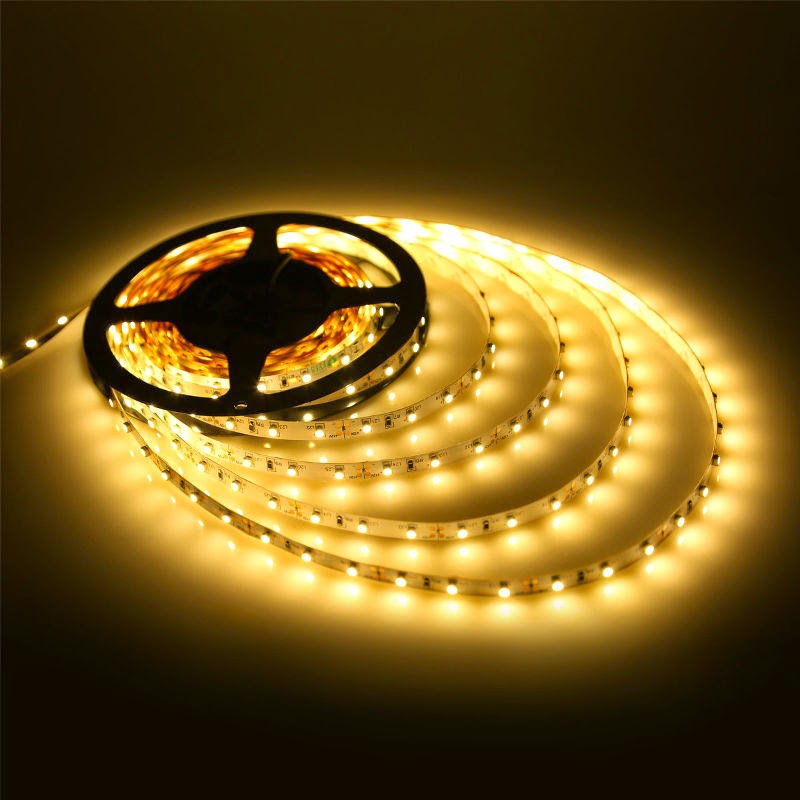 Before I get started on the conversion, I should talk a little bit about the LED strips.  The LED chips appear to come in two basic sizes, 3528 and 5050.  The numbers refer to the dimensions of the LED chip and the 5050 chips are supposed to be between 2 and 3 times brighter than the 3528 ones since there are actually 3 LEDs on the 5050 chip.  In order to compare various strips, you will need to know what type of chip is used as well as how many chips there are in a given length of strip.  A 10 inch strip containing 15 3528 LED chips will be about as bright as a 10 inch strip containing 6 5050 LED chips.  A 10 inch strip containing 15 5050 LEDs will be much brighter, and it will also consume more power than the 15 chip 3528 strip.

Also note that you can generally only cut the strip every 3rd LED otherwise some of the chips will fail to light.  So, if the chips are spread further apart on the strip, it limits the size of functional strips you can create.  In my project, I am using strips of 3528 chips that are spaced about every 11/16 of an inch. This allows me to cut a strip almost 10" long with 15 LEDs.  This is a useful size for fitting on the reflector of a fluorescent fixture.  I've found that three of these strips is approximately equivalent in light output to an 8 watt fluorescent bulb.

One last thing to note about LED's, there are usually two different flavors of white. Bright white, daylight white or cool white LED chips produce a very white light similar to commercial fluorescent bulbs and the color often feels cold or sterile to people.  Soft white or warm white chips produce a light a bit closer to the light produced by an incandescent bulb and tends to feel more warm and comfortable to many people.  These colors will vary slightly from manufacturer to manufacturer.  As I noted in my previous conversion, I chose a warm white LED strip and found it to be a little too yellow.  This time I will be using a combination of two warm white strips and one bright white strip per fluorescent bulb replaced.  I find this configuration to produce a light that feels brighter than the warm white alone and yet still feels warm and not sterile.

The lights I used in this project are the Lampux 12V Flexible LED Strip Lights, 300 Units 3528 LEDs, Non-waterproof, 16.4Ft 5M Spool from Lighting Ever. I have one spool of warm white, one spool of daylight white, and one spool of blue.  At $7.99 U.S. per spool you can get enough LED strips to replace 9 fluorescent tubes with extra lights left over for under $20 including shipping (prices from 1/2015, not including the blue option),

Converting a Fluorescent Fixture to LED

At the highest level, this project consists of disconnecting the fluorescent light ballast and connecting the LED strips directly to the switched power and ground wires of the original fixture. This process assumes you have a 12 volt system. 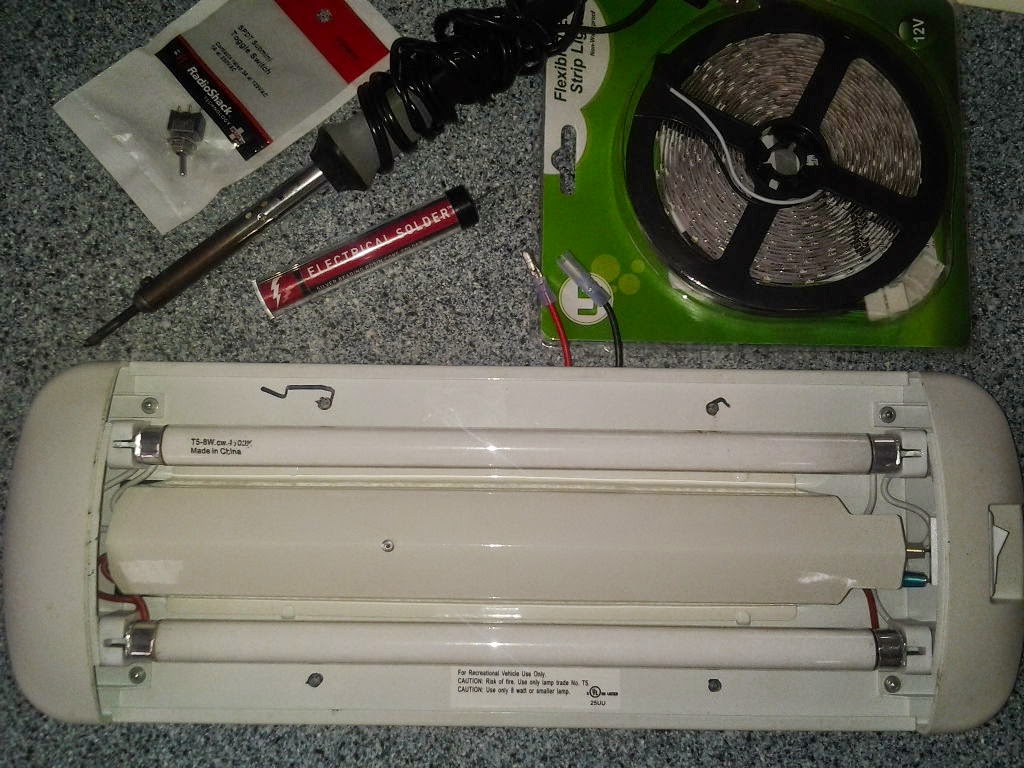 What You Will Need

First you will want to remove the fixture so you can work on it.  Turn off power to the fixture's circuit (not just the switch on the fixture).  Remove the fixture and disconnect from the ships power wires (if there are no connectors, you should consider adding insulated crimp on connectors to make future work easier).

If you want, you can remove the ballast and the bulb sockets (so long as they are not integrated into the fixture) as it may give you additional space to mount the LED strips and run wiring.

Dual Color Only: If you want to do the dual color option, you should replace the switch with the on-off-on switch or locate a position and mount the SPDT switch.  Attach the switched power wire to the center terminal of the switch and attach two pieces of wire to the other two terminals on the switch. These two wires will be the switched power for the array of white and array of colored LEDs.  Crimp two wires to the negative wire as you will need one for each LED array.

Now you will want to figure out how to position the LED strips in the fixture.  Cut a strip so it will fit on the fixtures reflector behind where the bulb once was.  Be careful to ONLY cut the strip at the marked locations.  If you are using connectors, attach a pigtail to one end of the first strip and an interconnect on the other.  If the strip came with a pre-attached connector, strip the wire so you can connect it.  Cut two more LED strips and determine how to position them.  I used two strips of the warm white and one strip of the daylight white per bulb, placing the bright white strip between the two warm white strips.

Remove the tape off of the adhesive backing and apply it to the reflector on the fixture, making sure you leave enough room for the connections.  If using connectors instead of solider, you may want to connect up the strips before sticking them down to the frame.

If you are making these connections to a metal fixture and using the solider option, you may want to use a little electrical tape to insulate the connecting wires from the fixture.

When making the wiring connections, you may find it helpful to use zip ties or electrical tape to secure the wires.  make sure that pulling on the wires from the back of the fixture does not pull directly on the connections.  If it does, attach the wire to other wires or some location on the fixture to provide stress relief for the wiring.

Dual Color Only: In order to find the space to mount two of the alternate color LED strips, I found it necessary to re-install the ballast cover. I placed one of the white strips on each side of the cover and put the colored strips on the top of the cover. Cut two strips of the alternate color LED strips and apply them to the fixture.  Connect the other switched power wire to the positive side of the first LED strip and connect the other ground wire to the negative side of the same end of the same strip.  Connect the second alternate color strip to the first just as you did with the white strips.

That's it.  You now have an LED fixture (perhaps one with dual colors).  Reconnect the fixture to power and re-install.  Turn the circuit power back on and test the light.  If you did the dual color option and used the on-off-on switch, one side should turn on the white and the other should turn on the alternate color.  If you used the second switch option, the power switch will turn the fixture on and the second switch will select either white or the alternate color. 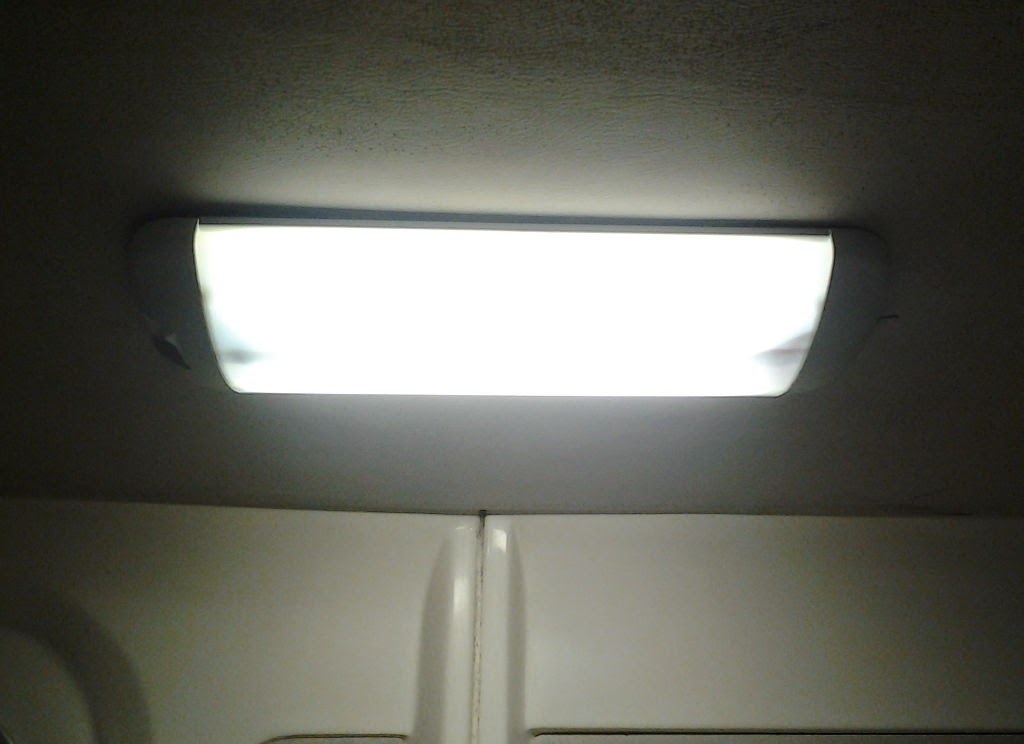 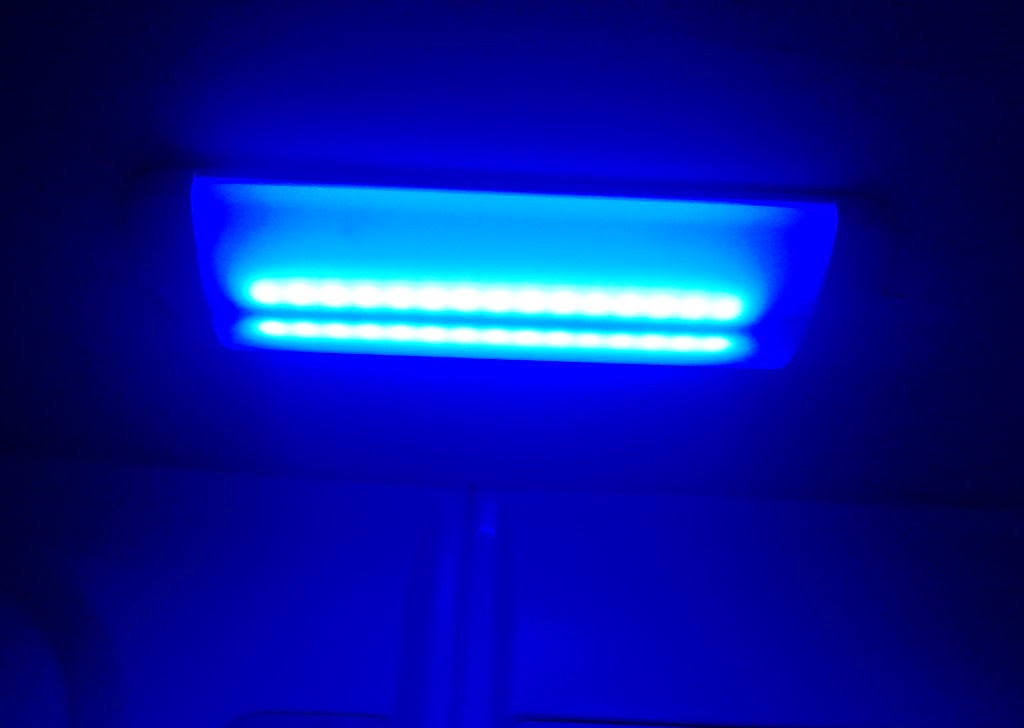 Well, I hope this all makes sense.  It is not a very difficult project and has the potential for cutting your lighting power requirements in half.
Posted by Mike Boyd at 9:57 PM