Bellhaven and An Alligator That Eats Anchors


We didn't exactly get up early that morning in Bellhaven, but we did get some much needed rest. This day's trip would start with a long stretch of man-made ICW ditch known as the Alligator - Pungo canal. It is a few hours of very straight and wind less canal with only a single turn. After that is the Alligator river and Albemarle sound. 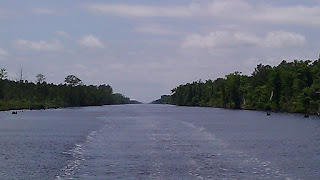 As we motored up the canal with the drone of one engine slowly depleting our diesel supplies, we listened to the weather reports. It sounded like the strong winds would be returning again in the afternoon.

The Albemarle isn't a place you want to be in strong winds as the shallow depths and long fetch can make for very rough conditions. The one automobile bridge that crosses the Alligator river won't even open in strong winds. Add in the fact we got a pretty late start and it was a sure bet that we would be anchoring out in the Alligator river this evening.  And that is exactly what we did.

I figured we might end up anchoring here and had scouted out several locations on both Active Captain and Skipper Bob's publications. What I found is that the river is known for a lot of submerged stuff that, as one site mentioned, could be hazardous to your anchor system. I guess some people drop anchor and then are never able to pull it back up. To try and avoid that issue, or at least help, I rigged up a trip line using a fender and some old dock line.

We checked out a couple different anchoring sites. With the large number of dead trees that surround much of the shore of the river, I can see why anchoring might be a bit hazardous to your anchor and chain. After a bit of debate, we finally decided on a location that was protected from the south-southeast winds but not from anything west...so I hope the winds don't shift. We dropped the hook and settled in for our first night together "on the hook". 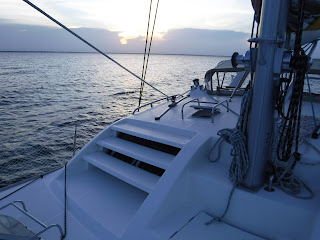 I even managed to play with the remote feature on our new camera and got a picture of us at anchor. 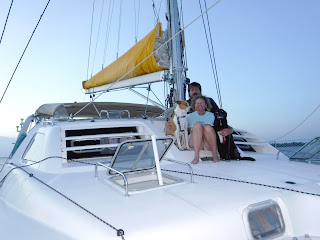