Down The Rabbit Hole Again

We are preparing to depart the marina in Charleston. My wife takes the dogs for one last "potty break" before we depart while I start the engines and enter our course into the chartplotter. Our oldest dog doesn't like the beeping of the engine alarms prior to startup, so this is a good time to start the boat up.  My wife gets back as I complete the chartplotter setup, and we go to pull the power cord in preparation for departure. And then the port engine just dies.

That is strange.  It had been idling just fine for 5 minutes or more.  I restart the engine, and it starts and then sputters back to a stop.  Third time, same result.  Hmm. The fuel filters aren't really due for a change, but perhaps the trip has kicked up some gunk in the tank or maybe I got some bad fuel so I change the main and try it again.  No luck.  I change the secondary filter (the Westerbeke engine has a small filter on the engine in addition to the Racor filter). Just as I'm putting the second filter back on, I notice the broken wire on the fuel pump.  Aha!  I clean up the wire, add a new connector, and put it back together.

I try starting the engine again...and it does the same thing.  I check to see if the pump is working, and it is not.  Great, do I need a new fuel pump?  I decide to check the pump by connecting it directly to the battery before I go buy a new pump.  I hook up the jumper wire and it starts pumping.  I test the engine connection for the pump and only see a couple volts on the multi-tester. Ugh.  Now I need to chase down a problem somewhere in the wiring.

I pull out the Westerbeke maintenance manual and start trying to figure out where the issue might be. I discover none of the wiring diagrams in the manual even come close to what is going on with the engine.  I begin tracing wires and find some really bizarre connections.  According to the diagrams, the wire that powers the pump is daisy chained to the power for a couple of sensors and is tapped off of the power supplying the preheat solenoid through a 10 amp breaker.  But what I find is the 10 amp breaker is not hooked up to the solenoid. Instead the breaker is wired to ground with a wire that appears to have a resistor embedded in the wire.  What in the world?!?

I continue tumbling down the rabbit hole and find a mysterious wire attached to this chain of power wires hiding behind the alternator.  I also find a couple other disconnected wires back there that don't have any obvious place to be connected.  One of them is a live wire connected directly to the battery and has been chafing against the alternator case...charring the wire to the point the ring terminal, that obviously hasn't been connected to anything in a while, was about to come off. I follow the mysterious blue wire and find it is wired to a relay mounted on the bulkhead. That in turn is wired to a blade fuse holder and on to the battery. The only real clue I have is that the fuses to the relay exactly match the ratings for the circuit breakers in the wiring diagram.

It appears that some time in the past some fault was found in the wiring harness and, instead of fixing the problem, some hack decided to wire up an alternative circuit, similar to the correct one, to bypass the original wiring.  Sigh. Not wanting to rewire the entire engine so it matches the diagram right now, I decided to take a page from the hacks playbook.  I create a small wiring harness with an inline fuse and connect it to a switched power terminal.  After triple checking my work, securing the new harness, and capping off and securing the other "unused" wires I found, we give the engine another try.  Now the pump works and the engine comes to life.

So, we are good to go (I hope). Of course, it is after 9PM and we are in no condition to depart. Maybe tomorrow. And I guess I'll be rewiring the engine at some point in the reasonably near future. I do wish this boat would give me a little break and let me actually enjoy having it. 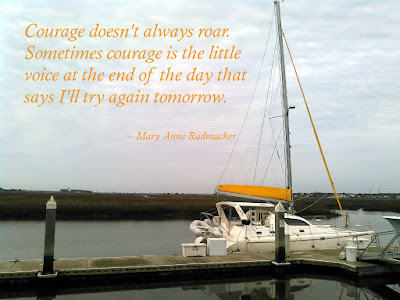 Email ThisBlogThis!Share to TwitterShare to FacebookShare to Pinterest
Labels: boat repair, living on a boat