Back in Southport Again

We departed Beaufort for an overnight sail to Southport just before 4 PM in order to make the Beaufort bridge opening (saving us a little time having to backtrack and take the other route through Morehead City). The drawbridge opening had us and a couple fishing boats heading out for the evening.  I don't know exactly what it is about the Beaufort inlet, but for the second time in as many passages, it was a rough ride.  I guess the outgoing current combined with the easterly swell to make for a choppy entrance.  We bounced our way out and after turning on course, the sea mellowed out...somewhat.

The forecast was for 1 to 2 foot waves on a 12 second period and light winds from the Southwest.  While the winds would be directly on our nose, the seas should make for a fairly comfortable ride.  Of course, what to weather forecasters know about the weather.  The actual winds were around 15 knots, but it was from the south-southwest. There was a swell from the east that was probably a foot or two on 12 seconds, but the higher winds were also creating waves from the south that were also a couple feet on a six second period.  Not quite as smooth as forecast.

Still, the winds gave us an opportunity to sail, just not directly toward our destination.  We were making about 5 knots, with 2 or 3 of those in the actual direction we wanted to go (VMG). We sailed all night and by early in the morning we had made it a little over half-way.  At that point, we decided to fire up an engine and motor sail to get a better angle.  As the wind shifted around to be right on our nose, the sails came down and the other motor was started so we could make it to Southport before nightfall.

We arrived at the Masonboro inlet around noon, a couple hours later than planned...but at least we got to sail some so it was worth it.  The down side of being late was that we missed the ideal timing window for the trip through Snow's Cut and on to the Cape Fear river.  In an ideal case, I would have liked to have been at Snow's Cut at high tide so there wouldn't be a lot of current and then we could ride the falling current down the river.  Since we were late, we found we were fighting a 3+ knot current from the Carolina Beach inlet through the entrance to Snow's cut.  Something very noticeable when you are only traveling at 6 or 7 knots to begin with.  After only making 3 knots over the ground as we approached the cut, we did pick up another knot in the cut.

Once into the Cape Fear river and heading downstream, our speed was up to a brisk 8 or 9 knots even though the waves and wind were (as usual) directly on our nose.  It didn't take long until we were in Southport.

Normally I would stay at Deep Point marina as I like the combination of amenities and price.  Unfortunately, the number of cruisers heading south combined with the damage caused by Matthew and they didn't have any space available.  Fortunately, they did have one space left at their other marina, Indigo Plantation.  We made our way there, found the one last space for a wide-beam boat, and we were tied up and secure in Southport. 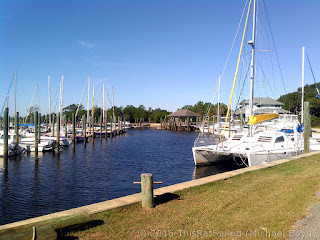 The following days we retrieved the car left at Dowry Creek, met some friends for dinner, met a couple fellow Leopard owners that were in the area, and started looking into what we should do about the remaining trip.  With all the damage in St. Augustine, dock space is at more of a premium than it is here and that comes with a premium price. At this point, we are considering leaving the boat here in Southport.  We have a dock at a reasonable rate and it is fairly well protected for the area. The down side is that it is a bit far from our broker and we will need to see about finding someone to keep an eye on the boat.

We haven't made any decisions yet, but we are running out of time so we will need to come up with a plan soon. Meanwhile, we are enjoying this charming town.
Posted by Mike Boyd at 8:05 PM