Bridges and Locks - Coinjock to Portsmouth

Since I'm fairly new to this whole cruising gig, I wasn't sure quite what to expect for this leg of our journey.  It was all ICW and it had a few new potential challenges.  I've only had limited experience with bridges, most of which have been on-demand and not scheduled openings and I've never dealt with a lock before.  But all of that was ahead of us on this leg of the journey, so I had planned on a fairly short 45nm hop from Coinjock to just south of Norfolk.

We left Coinjock around 8am and were once again motoring up "The Ditch" (ICW).  I think the local osprey have decided that the ICW channel markers are their own version of government subsidized housing.  It seemed that just about every mark had an osprey nest on it with an osprey protecting her eggs.

As we continued motoring, the chart showed a bend in the river, outside the ICW channel, with a bunch of marked shipwrecks.

And, indeed you could see some of them from the boat.  One does wonder how so many boats met their end in this little elbow of water.


Around noon, we made it to the first of the bridges that we needed to have opened that open on a fixed schedule.  The North Landing swing bridge opens on every half hour, and so naturally we arrived just a few minutes too late to make the opening.  This ended up giving me plenty of practice at station-keeping while we waited for the bridge.  Fortunately the ICW doesn't have a strong current and so this is pretty easy in a catamaran.  In fact, we ended up having lunch while waiting for the bridge.  Once the bridge opened and we were on our way, we figured out that we wouldn't be able to make the next opening of the next bridge on our route, so we throttled back to a speed that got us to the next bridge about 5 minutes before the following opening.

After the first two bridges, next was the Great Bridge and Great Bridge Lock.  The bridge opens in sequence with the lock since they are only a few hundred feet apart.  We had to wait for a few minutes, but pretty soon the bridge opened.

We then made our way to the lock.  We deployed fenders, found our boat poles, and setup a bow and stern dock line so we could take a ride in the lock. When we motored into the lock, one of the lock operators looped our lines around a couple of the big bollards on the shore and threw them back to us.  The idea is to keep your boat parallel to the lock wall without quite touching while the water raises or lowers.  There was only one other boat in the lock with us, Goose, as you can see below.

I admit I was a little nervous about the lock since I had never done it before and had heard of people having issues when locking, but it really was no big deal.  I imagine I might think differently if this were the Panama Canal and I was surrounded by big ships.

We were making good enough time that we decided to see how far we could get and ended up making it to Norfolk and had to go through the Gilmerton bridge.  I guess we got lucky that a barge was coming through the other way as I've heard this bridge doesn't open, except by reservation, during rush hours.


Passing through Norfolk and Portsmouth, you can really see these are big ship towns including a naval yard.


We ended up at one of the free town docks in Portsmouth.  They are right downtown and convenient walking distance to a number of restaurants and stores.  The only downsides are the lack of marina amenities (water, power, bathhouse) and the fact that the dock is awash at high tide, but it is definitely nice for the price.  I'd recommend it for a short stay if you are in the area.


After the day's excitement, we decided to have dinner at one of the local sports bars as a celebration of making it through all the bridges and locks and ending up at a nice place to spend the night (and not having to pay for marina dockage).  I hear the weather is supposed to turn bad tomorrow, so we might be here an extra day if it sounds rough to travel.  Guess we will see if the weather guessers are right. 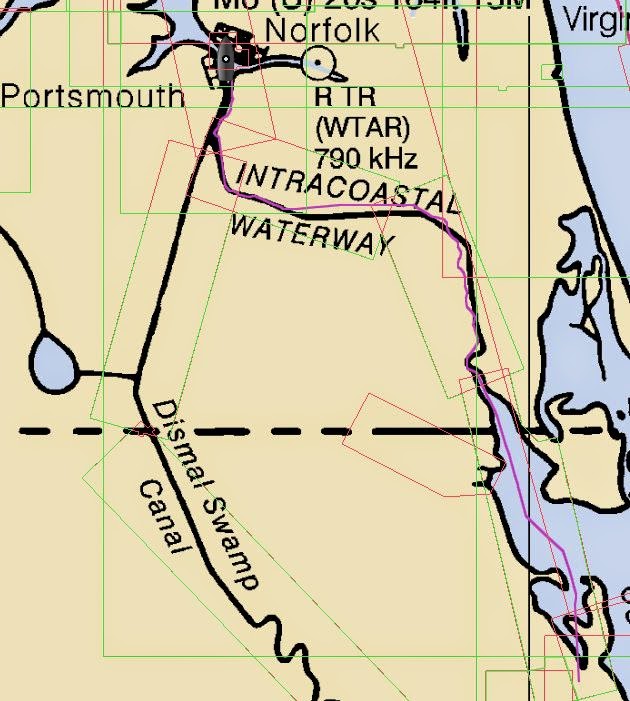